Showing posts from May, 2015
Show all

CHM Graduates Moving On To Residencies Across the Country 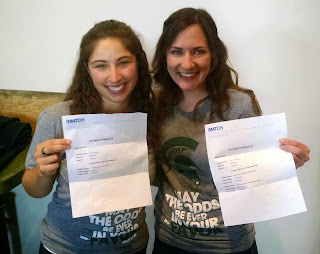 After fourth-year College of Human Medicine (CHM) students enjoy their commencement ceremony with friends and family this weekend, the Class of 2015 will also be eyeing the next step and first as official physicians—residency.

This past March, 178 soon-to-be Spartan MD's had their residency placements confirmed. As usual, the 2015 Match season was one of great pride and joy.

Approximately 34% of the seniors will remain in Michigan for their graduate medical education. The remaining 66% of students will be training in many other states across the Northeast, Southeast, Midwest and West regions at some of the most competitive residency programs in the nation.

New Spartan MD's will be moving on to serve patients all across Michigan in both urban and rural communities. Beyond state lines, graduates will be headed to many of the nation's major cities like Detroit, Chicago, Indianapolis, Boston, New York, Los Angeles, Miami, Houston, Phoenix, Atlanta, San Diego, Denver, and even…
Post a Comment
Read more
More posts